On this Earth Day 2020 #EarthDay2020 It is important we pause and peruse the pernicious perils that pot is putting our environment in!

Yup you read right! The alliteration is deliberate, and soft in its sentiment compared to the harms all illicit drug use – particularly Marijuana – does to the global environmental condition.

We continue to be amazed at not only the cognitive dissonance, but utter hypocrisy of many of the drug using demographic, who espouse ‘save the planet’ mantras, but exercise choices every day that are in direct contradiction to the Cause they purportedly follow.

One of our team recalls an encounter he had with a World Wildlife related street representative/collector in a shopping mall some years ago. The, almost cliché looking advocate was attempting to fulfill her difficult task of engaging busy shoppers with her message.

Dance, she seemed to believe, was an engaging tool. As she twirled and spun with dishevelled dreadlocks flailing, and her decal be speckled army-greens raiment swirling, she confronted our team member and asked if he would give some money to save the diminishing habitat of some species. The environment being of some concern for our team member (and a little time permitted) he engaged. However, he soon noticed on the cladding some pro-Weed decorations and then leaned in to interrogate.

The simple question he started with was… “If you stop using Weed permanently, I will donate to your fund?”

The representative previously confident and self-assured demeanour darkened with a look of not only shock, but some anger. Our team member quickly rattled off some of the data you will read below and though with some grace, uncompromisingly called out the hypocrisy of those espousing environmental care, whilst participating in a non-essential, self-indulgent and agency/care diminishing recreational activity of drug use – an activity that is stripping forests, polluting ecosystems, depleting precious water, and consuming huge amounts of electricity.

Once this short, but robust exchange was done, the World Wildlife representative, went quiet, was embarrassed, tried to get out some words (failed) and with that both parties went their separate ways.

Whilst that encounter revealed what most non-drug using cohort know, that the inconsistency in credibility, along with blatant hypocrisy are rife in the drug using sector. Which of course is one of the reasons so much propaganda is being deployed by the pro-cannabis lobby in an attempt to bury these clear and unreconcilable harms done to just the environment, simply for the sake of ‘getting high’, or even to be kinder ‘chilling out’!

Of course, supposed ‘finger pointing’ as this little vignette may be accused of, is now also being removed from the market-place, with attempts to put in place oppressive speech codes that will not permit you to call out such hypocrisy, at the risk of potentially ‘stigmatizing’ the illegal drug user – not those caught in the tyranny of addiction.

However, on this EARTH DAY, at the very least we should be able to call to the public’s attention the (for the most part) buried harms of the marijuana industry in all its scope.

Harms and disasters buried by pop-culture propaganda and lack of political will to call this out for what it is, a travesty.

The following snapshots are becoming more difficult to obtain in very recent years, but the damage is being done and few there are looking to hold the addiction for profit industry to account.

Planting cannabis for commercial production in remote locations is creating forest fragmentation, stream modification, soil erosion and landslides. Without land-use policies to limit its environmental footprint, the impacts of cannabis farming could get worse, according to a new study. (Marijuana Hurts Environment – Study, Science Daily)

Marijuana, hue notwithstanding, is not exactly new school green. In fact, it is the worst drug for the environment. Marijuana growers use $US5 billion worth of electricity to power lightbulbs, fans, dehumidifiers and whatever else it takes to grow weed. That is 1 per cent of the national electricity consumption.

Not only that, smoking a joint is worth 1kg of carbon dioxide emissions. Who knew getting high could have such environmental consequences! We will ignore the fact that if it was legal, growers could grow out in the open and not damage the environment with energy consumption. Thanks lawmakers. (Smoking Weed Is Really Bad For The Environment)

Their article points out that cannabis is an especially needy crop requiring high temperatures (25-30 °C for indoor operations), strong light, highly fertile soil, and large volumes of water - around twice that of wine grapes. In addition, the authors state that the few available studies of marijuana cultivation have uncovered potentially significant environmental impacts due to excessive water and energy demands and local contamination of water, air, and soil.

For example, a study of illegal outdoor grow operations in northern California found that rates of water extraction from streams threatened aquatic ecosystems. High levels of growth nutrients, as well as pesticides, herbicides, and fungicides, also found their way back into the local environment, further damaging aquatic wildlife.

Controlling the indoor growing environment requires considerable energy with power requirements estimated to be similar to that of Google's massive data centers. No significant data has been collected on the air pollution impacts on worker's public health inside these growing facilities or the degradation of outdoor air quality due to emissions produced by the industrial scale production of marijuana. (Legal marijuana sales creating escalating damage to the environment)

As far back as 2011 the National Geographic was sounding the alarm on drug use impact on the environment, particularly cannabis – Remember this is just at the commencement of a legalized ‘medicinal’ version of weed, and on the cusp of the first recreational unleashing. The figures then were staggering, and not fully reported due to the dubious legal status of the plant.

When it comes to wasting megawatts, marijuana is the greatest offender. According to a 2011 study of indoor pot-growing operations, growers in the United States use about $5 billion worth of electricity to power lightbulbs, ventilation fans, dehumidifiers, and other appliances to mimic outdoor growing conditions. That is the output of seven large electrical power plants, or one percent of national electricity consumption, wrote Evan Mills, a staff scientist at Lawrence Berkeley National Laboratory, who performed the study independently. Smoking a single joint, Mills wrote, is worth two pounds of carbon dioxide emissions. (Marijuana: High on Megawatts)

As you can predict these consumption rates are only being dwarfed by consecutive years. The more permission granted for use of weed, and the laxer the laws, and more under resourced the bureaucracy, the greater the number of grows and the ensuing resource consumption. The following snapshot, though dated, is disturbing.

Energy: Marijuana enterprises are power hungry with this industry is one of the most energy intensive. A study conducted at the Lawrence Berkeley National Laboratory, revealed that

The energy to produce a single joint emits three pounds of carbon dioxide, the equivalent to leaving a TV on for over 15 hours. Pot is almost four times more energy-intensive than oil or coal. It uses so much power that indoor pot production in Colorado is responsible for two percent of the state's electrical load and 45 percent of all new electricity demand coming online.

Even Vince Palace writing for the Guardian in an article We must study marijuana's impact on the environment before it's too late, was ruing that fact that governments in their ‘green rush’ have failed to even seriously look at the harms to the environment.

We could go on, but you get the gist. They say a picture paints a thousand words. So, we leave you with this one. 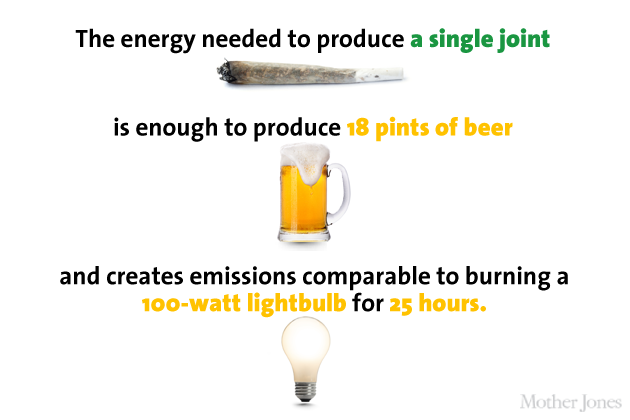 For more go to Cultivating Disaster and www.silentpoison.com

Make it a Happy Earth Day 2020 and Stop the Pot! #EnvironmentalJustice